After the hugely enjoyable canal boat trip on the Canal du Midi five years ago, another French self-navigating boating holiday was always in our future. With seven months of long leave due before retirement, the opportunity presented itself and we convinced the Verhoevens to join us. Photos in the brochure of the Lot River and Cahors in southern France had convinced me that riverboating on Le Lot should be our trip.

The Lot is fundamentally different from the Canal du Midi. The latter is a man-made canal of spectacular engineering achievement dating from the late 1600s, excavated to link France’s Atlantic and Mediterranean coasts (read more here). The Lot, by contrast, is the longest tributary river in France, 260 km of which was originally navigable. It feeds into the Garonne and flows from east to west in the region east of Bordeaux and Toulouse. Flat-bottomed gabarres have traded along its length from the Middle Ages, but it was when the Industrial Revolution came to south-western France from 1840 that river traffic exploded.   During this period the river was canalised by the construction of 75 weirs and many locks to ease the transportation of coal by barge from open-cast mines to the main centres. “Canalised” does not mean that the river was turned into a narrow ditch; rather, the weirs formed broad, slow flowing pounds and the rapids were replaced by locks. However, the era of trains put an end to the barge industry and the river as a transport waterway was abandoned in 1926. (Source: French Waterways)

The Lot’s restoration as a cruising waterway commenced in 1985 after lobbying which began in 1971. Restoration of three navigable sections of the river for cruise tourism seems to have been extremely successful. The middle section of about 75 km between Luzech and Larnagol is centred around the old city of Cahors which lies in a horseshoe river bend. Cahors is redolent with history: dating from Celtic times, it became a large Roman city. Monuments and architecture from the Roman era and the Middle Ages, including a mediaeval quarter are all worth visiting. The surrounding area is famous for its Malbec wines. Malbec is a favourite of mine so of course Paul and I had to sample to local fare, only to be flabbergasted when the bill arrived. We only did that once. 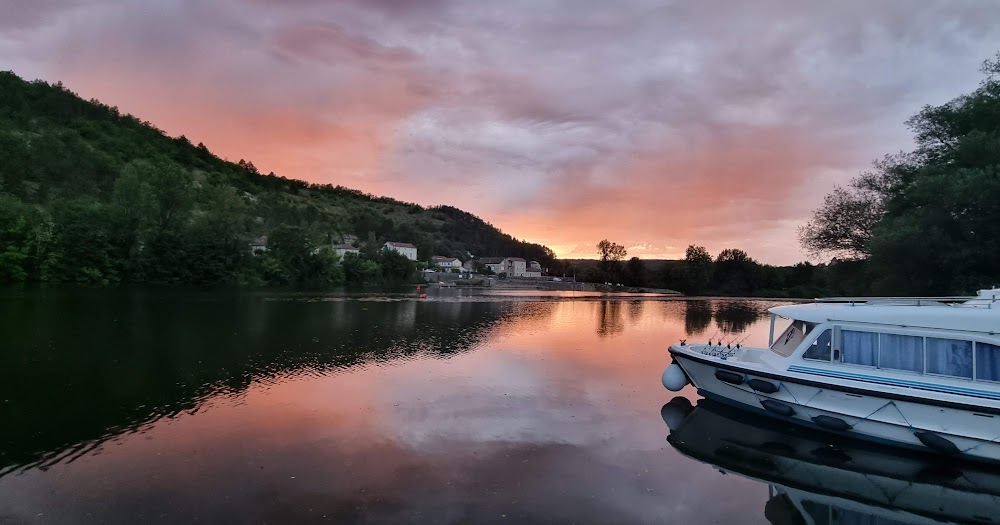 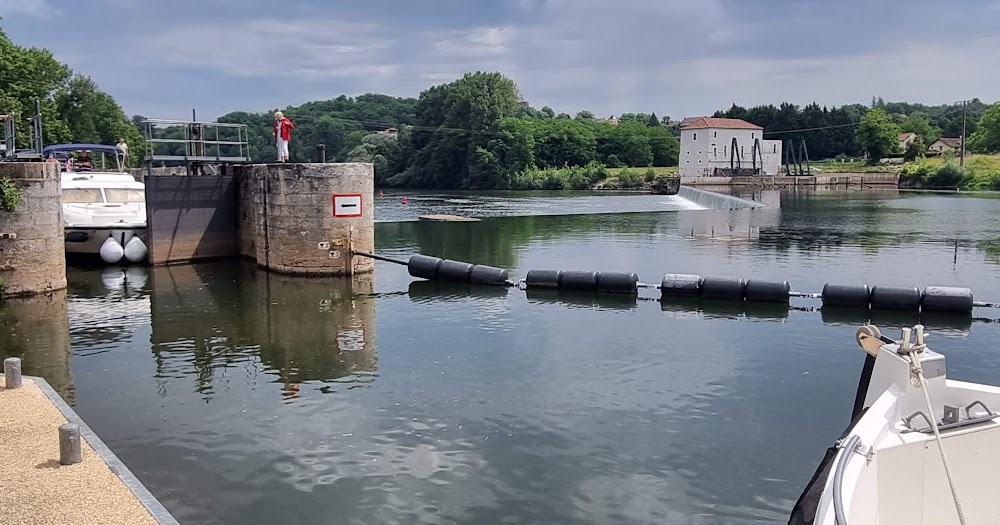 While we were waiting for the train from Montauban to Cahors, two days before the cruise, I received a call from Locaboat, the operator, to say that our reserved penichette on the Lot had been found to be infected with bed bugs, and as they did not have an alternative boat, they were prepared to offer us an alternative cruise out of Argens-Minervois on the Canal du Midi. After quick discussion, we agreed to the change because the Verhoevens had not been on the canal before and Marion and I would be able to travel a new section of the canal, having terminated in Argens-Minervois last time. Our only proviso was that Locaboat had to transfer us to Argens-Minervois, 250 km away, and back because onward travel by train had been booked from Cahors. They agreed. However, on the train another call: they had had a cancellation on the Lot and would upgrade us to a penichette with a bridge steering position at no extra cost. We would have to return one day earlier,  but would be credited with the cost of that day. We were on again!

Up to now the trip had not been without its excitement. I had inadvertently left my small backpack containing my laptop on a bus at Bordeaux train station while en route to Cahors, but managed to retrieve it after a desperate sprint to the bus terminus where I found it in the first bus I boarded! It was reminiscent of our miraculous recovery of Peter’s wallet five years earlier on the Canal du Midi. 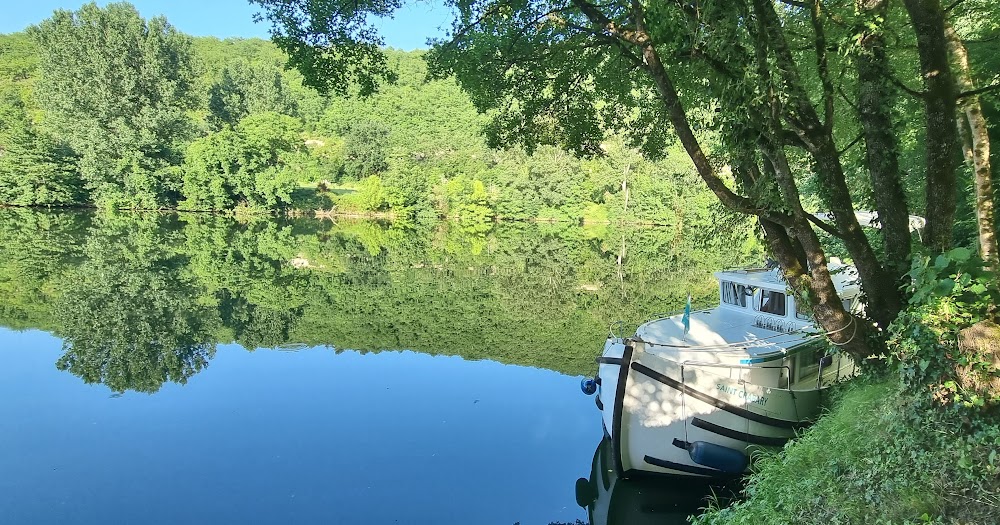 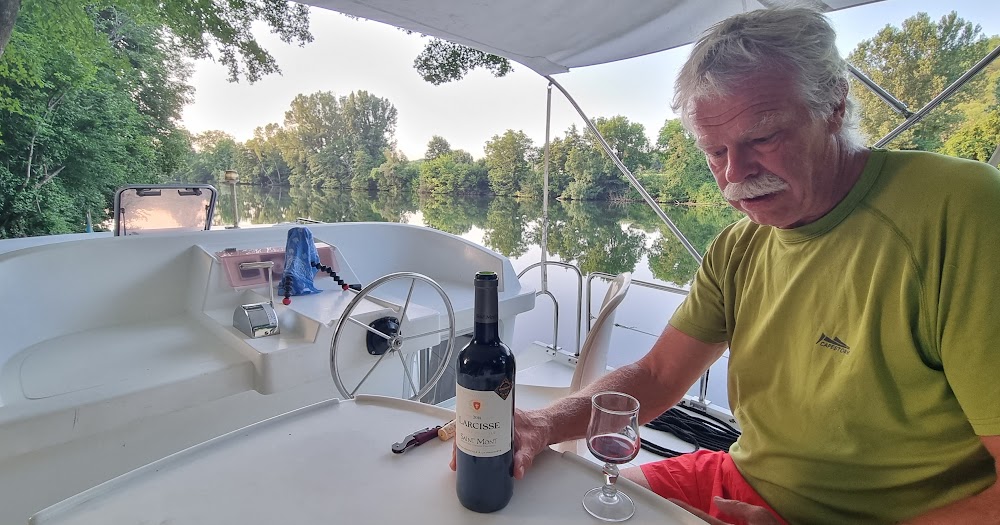 With our time on the penichette, Saint Crabary, now shortened by one day to 6 days and Paul and me of a similar mind to cruise the complete section between Luzech and Larnagol, we tended to spend most of the days puttering along at 8 km/h, the maximum allowable speed, rather than expending time exploring villages, wineries and chateaux. Basically, we could cruise where we wanted, but having left from Cahors, had to return to Cahors, and were compelled to strike out to the west first as a training run so that our trainer could be satisfied that we would not crash the boat. Paul and I shared helming duties, and operated the locks. Unlike on the Canal du Midi where the locks are motorised and often operated by lock-keepers, the Lot’s locks are manual. It is quite physical work to close one set of huge gates, open and close different sets of sluices so that the boat can lift or drop, and then swing another set of gates open, the sequence depending on whether one is cruising upstream or downstream. There are relatively few boats on the river, so we seldom got to share duties with other crews. 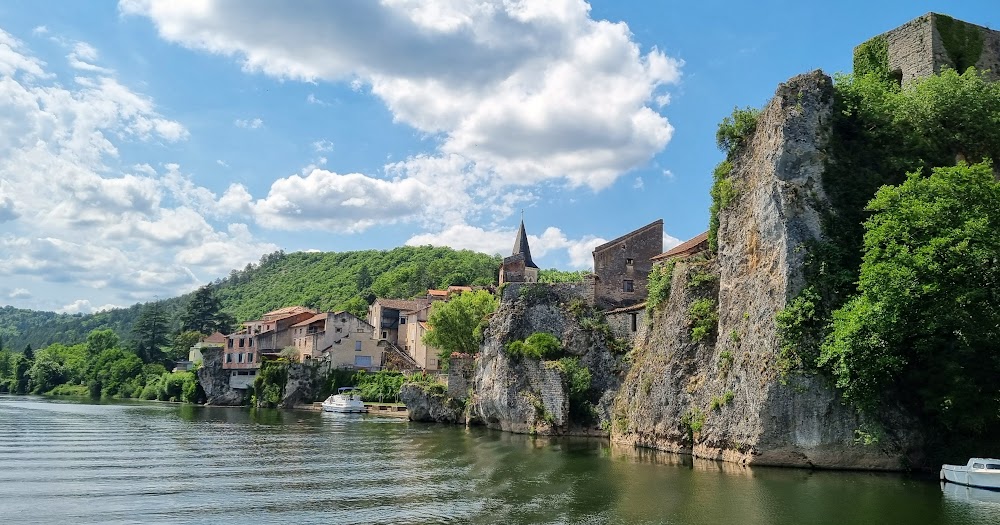 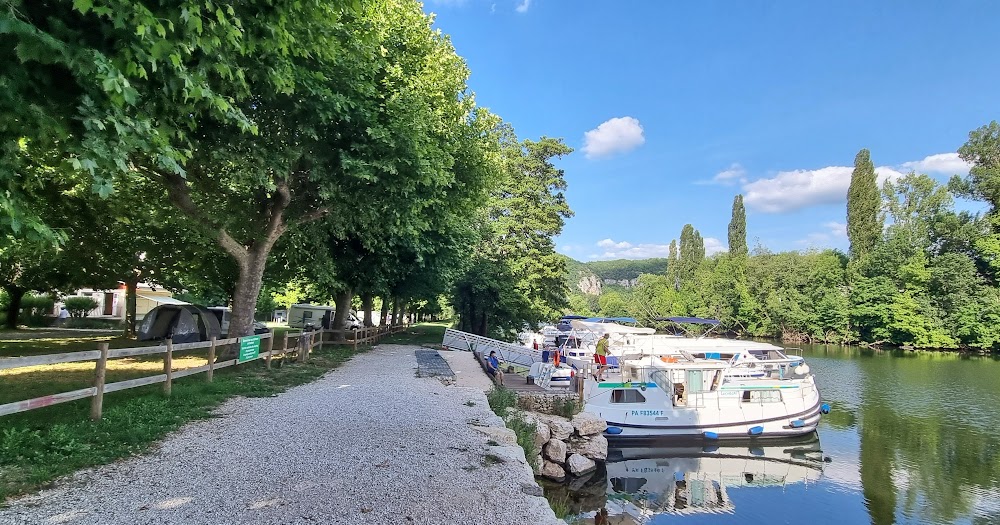 It was hot and windless on the river, with temperatures in the upper-thirties. France was already in the grip of a drought and heatwave. It would only get hotter and after we had left temperatures were well into the forties. Most of the other boats seemed to be carrying French people who apparently preferred to spend long hours moored and lazing in the heat. En route to Douelle  we came across a boat crewed by some young women, hard aground. At this time the river is quite shallow and one has to diligently navigate in the channels indicated by buoys of different shapes, but the depending on whether one is cruising upstream or downstream one needs to leave a certain shape to starboard or port. At Douelle, our first overnight, an English couple was moored nearby. He fished deep into the night, carefully weighing the large catches and returning them to the river. This is apparently his annual ritual.

The next day we U-turned above the hydro-electric dam at Luzech, after enjoying a pleasant lunch under trees, and moored for the night in the shade of a forest on the bank upstream of Douelle. Here it was cooler and quiet. These “wild moorings” are indicated on the river map, but there are no amenities, services or jetties. 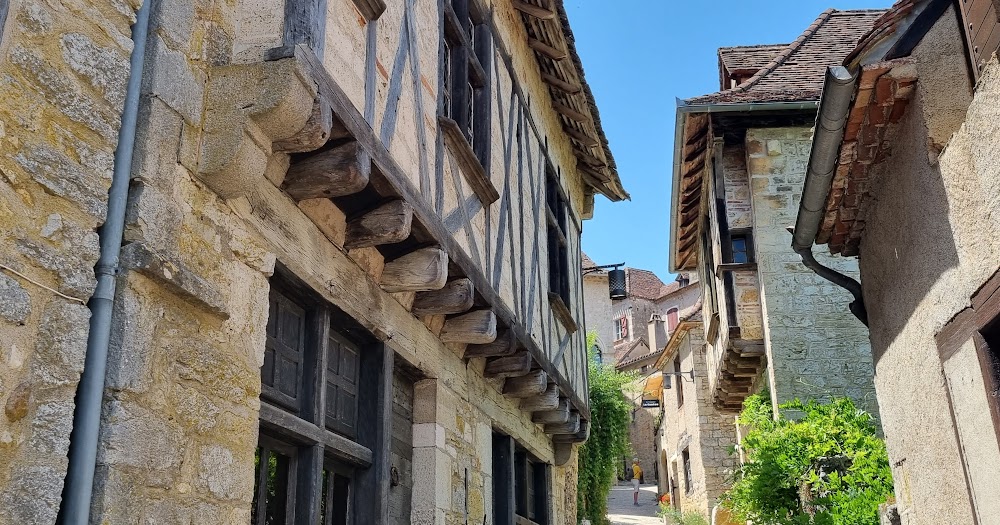 Day 3 saw us negotiate the lock below the imposing Pont Valentré, a 14th century icon of Cahors, and attempt to penetrate as far east as possible. We found a relatively crowded mooring at St Géry-Vers next to a pleasant, shady campground below the village. And so we settled into an easy rhythm: a leisurely breakfast, cruising, stopping at sites of interest and ancient mediaeval villages such as Saint-Cirq-Lapopie  (now a member of “the most beautiful villages in France association” and “besieged” by 400 000 tourists annually), a typical Mediterranean lunch on board, more cruising, tea, and easing into an overnight mooring, supper on deck. 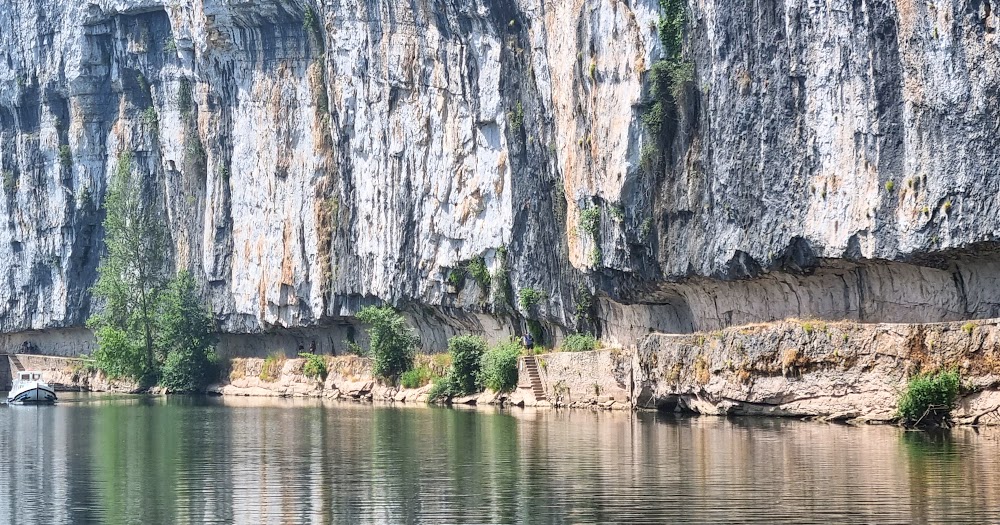 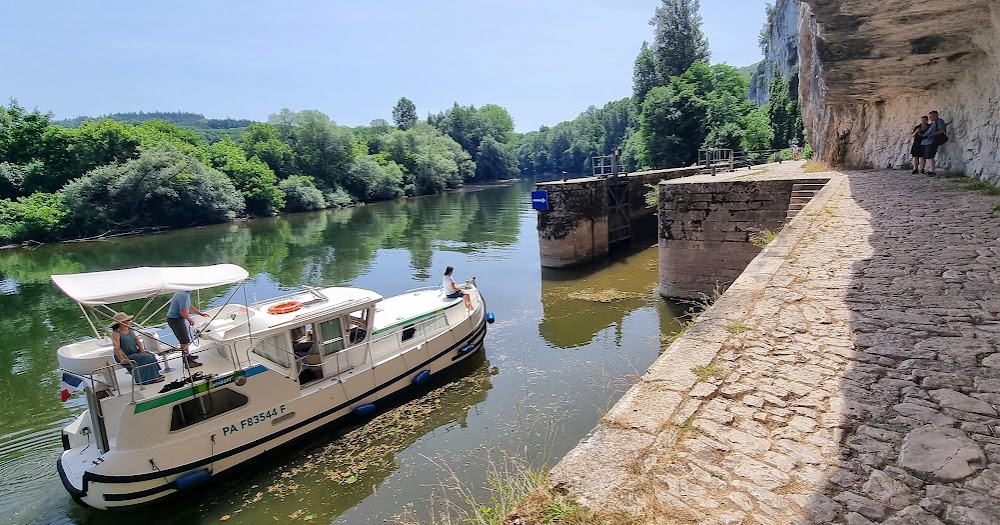 Further east the river meanders through steep gorges, with most strategic promontories dominated by some mediaeval chateau (such as Cénevières, which we visited) or other. We overnighted at the easternmost end of our section at Larnagol, a village that appeared to be “closed”, and then at Bouziés, a popular town, and finally near Cahors in order to return the boat by 09h00 the next morning. A fascinating feature east of Bouziés is the barge towpath that is hewn across a limestone cliff. Men and draught animals used to haul convoys of goods and coal-laden gabarres by means of the towpath. It appears in many cruising brochures and is probably the one image that “sold” me on the idea of boating the Lot.

These boating trips are simultaneously relaxing and physically and mentally active, but the Lot is different to the Canal du Midi. The canal is engineered through flattish land and shallow valleys; the Lot brings one closer to nature, meanders through narrow gorges, is hemmed in by cliffs, yet is a tamed river. On the advice of the local agent, we did not rent bicycles this time, because most of the attractions are also in the river gorge and can be reached on foot. 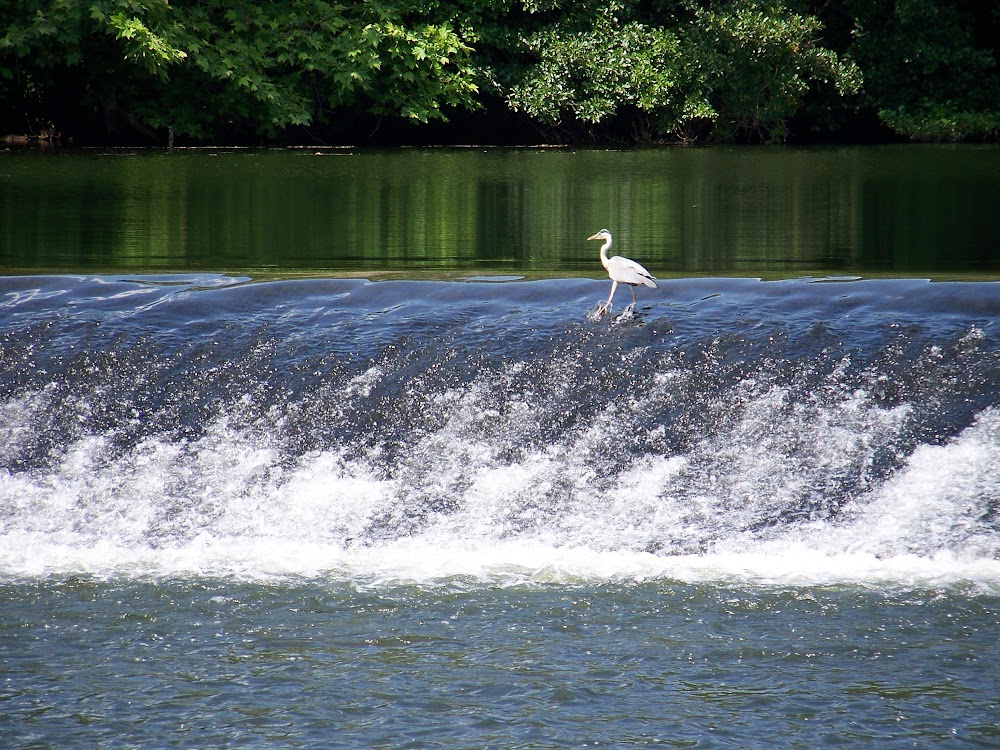 On this trip, Marion and I also cycled in Connemara, visited Flanders in Belgium at Paul’s invitation and spent a couple of days in Wassenaar in the Netherlands, my father’s hometown and where he grew up during World War II. As we journeyed I reflected on how religion, and specifically the conflicts between Roman Catholicism and the Protestant Reformation, shaped all the places that we visited – and where we are from. Ireland is largely Catholic, but during the invasion by Cromwell Irish Catholics were persecuted and many clerics fled to France. In France, which is largely Catholic too, the Huguenots were persecuted, and many fled abroad, including to the Franschhoek in the Dutch colony in what is now South Africa, where we live, while others went to the Protestant Low Countries. It is from this latter group of Huguenots that my father descended. He and his brothers and parents would subsequently also emigrate to South Africa after WWII. Flanders itself, a Dutch-speaking Catholic region of Belgium, is a product of the religious split with the Protestant Dutch republics. Protestants in Flanders were expelled to what is now the Netherlands, while Catholics were persecuted in the Dutch republics after the republics  threw off the Spanish yoke, and in turn fled to Flanders. My dad’s wartime neighbour gave me a book about the dorpskerk (village church), a reformed church, in Wassenaar during our visit. Originally it was a Catholic church.