Simonsberg has been a looming, brooding presence in my life for almost fifty years. It towered to starboard daily on the short walks to engineering classes, and later on the cycle commutes to work. In stressful times when I needed calm and to gaze at something timeless, something bigger and transcendent,  beyond the drudgery of study or working life, I “looked to the mountains”. And that mountain was usually Simonsberg.

Yet, I have only climbed it twice: once about thirty years ago – and last Sunday. Once again, it was Santie’s idea. After the winter storms earlier in the week, Sunday was a crisp, brilliant-blue, clear day. Traces of ice clung to grassy clumps on the mountain’s cold south-western face . The climb is relentlessly vertical – four days later my legs are still sore. The well-worn path ascends an obvious ridge and jacks up the cliffs suddenly where some slight scrambles are required. The path then contours to the left across a grassy slope, before zagging up a gully to the summit. I remember the grassy slope path as disconcerting from that first climb: it felt narrow and sloping so that any slip would see you disappearing over the edge. But this time the vegetation seemed a lot taller, the path more compacted and horizontal, so that it felt very safe. Perhaps thirty years of mountain walking have simply blunted the fear of heights to some extent.

There are two curious things on the summit. One is a wooden cross that someone saw fit to lug all the way up. The other is a pile of river boulders with each displaying white painted names, obviously the handiwork of Simonsberg university residence first years/freshmen. It’s rather incongruous against the angular sandstone on the summit, but I suspect that they may recycle them because the hazing tradition has existed for decades, which would mean there should be a massive mound of boulders up there by now. 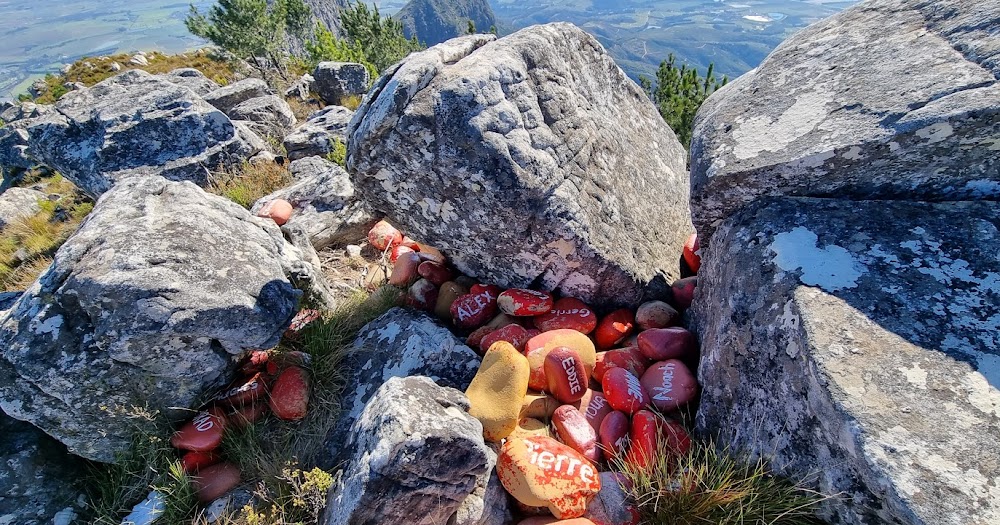 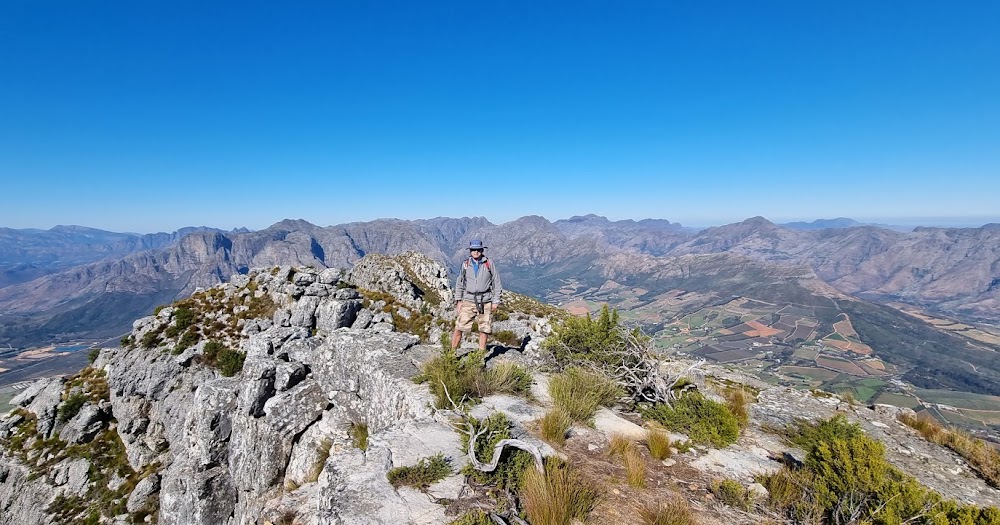 You can park your vehicle beyond the Tokara Deli at the Tokara estate gate, where a guard notes your details. Hikers are required to be back there by 4 p.m. If you set out after 10 a.m. and want to spend some time on the summit, then you will need all that time – unless you are a trail runner. We met two on the way down, one of whom I know, while we were wheezing up the lower slopes. 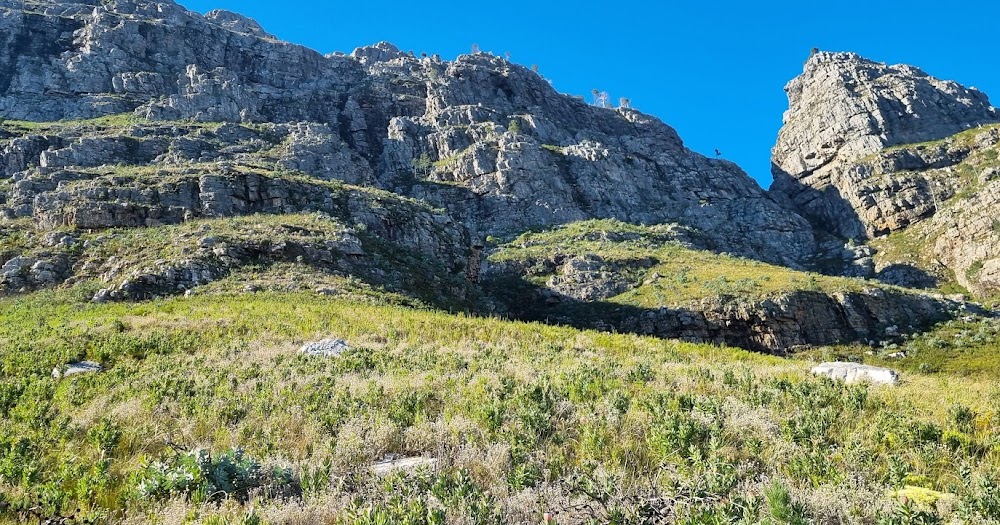 Link to the Simonsberg photo album

Many locals might not be aware of the old silver mines on the Pniel side of Simonsberg. I vaguely remember reading about them in a book by Lawrence Green or Jose Burman, I can’t recall which. As I remember an early conman successfully received multiple rounds of investment from the VOC (Dutch East India Company), without ever producing a gram of silver. The shafts and tunnels are still intact, and some have explored them. Simonsberg, named after himself by Simon van der Stel, an early VOC governor of the Cape, was also the hideaway of escaped slaves and assorted bandits during the early years of the Cape Colony. The pretty village of Pniel that clings to Simonsberg’s south-eastern slopes, was established as a mission station that settled landless and homeless slaves from about 1842, after the abolition of slavery.