… go out in the midday sun (in the Cederberg in summer)

Or so the song goes. Except that the hiking group comprised a Belgian, a German, a half-Dutchman, a half-Greek-Cypriot and a boeremeisie – the instigator. All keen hikers and outdoorspeople. Almost exactly twenty-one years ago, after a Cederberg hike in a heatwave I had promised myself not to venture here in mid-summer again, but here I was, persuaded once more by the chance to experience an unseen part of this wilderness in the company of like-minded people. The only mitigating factor was that I had decided not to do the planned, full 6-day traverse from Algeria to Nuwerust, but shorten my hike by leaving my companions at Bakleikraal and walking out to Eikeboom, where I had left my bakkie.

The first day from Algeria up to Zuurvlakte featured a steepish climb which we tackled as early as possible to avoid being caught on the ascent in the worst of the heat. After crossing Zuurvlakte the trail plunges into the Kruisrivier gorge (or Kruiskloof), which is surprisingly verdant with a variety of largish trees. There were numerous signs of leopard: old scratch marks on a waboom, white scats and a clear pawprint in the path. In fact we came across similar scats regularly all the way to Bakleikraal. After taking the dogleg in the gorge, Bo-Kruis camp appears under riverine trees. But we continued to an unnamed camp a kilo or two lower down which also has flat areas under trees but easier access to the stream. Having reached the camp fairly early in the afternoon after 9.2 km and ascending and descending through almost 1000m, we were happy to lie in the stream, snooze and leisurely enjoy meals and drinks. Most of us had dispensed with the tents to lighten our packs and that decision proved to be wise. This camp lies about a third of the way between Bo-Kruis and Onder-Kruis camps, the latter located where the path exits the gorge. 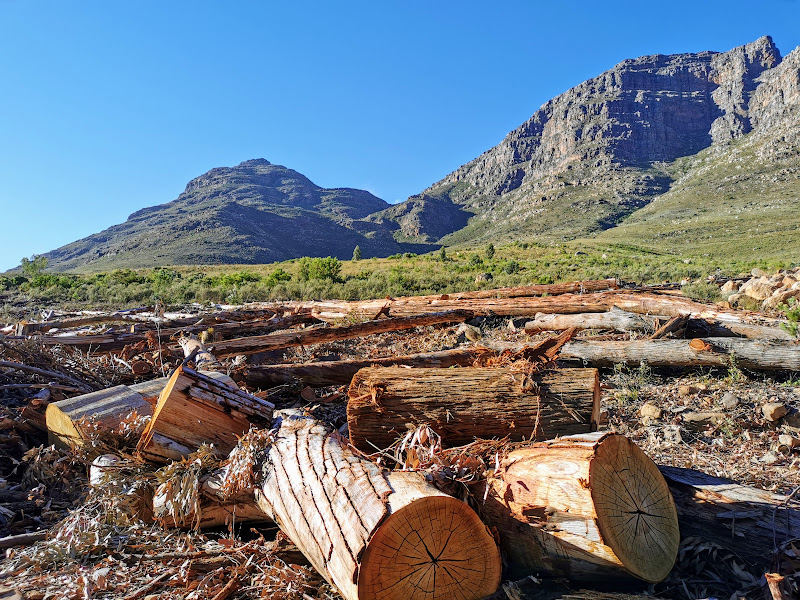 Up through that saddle from Algeria 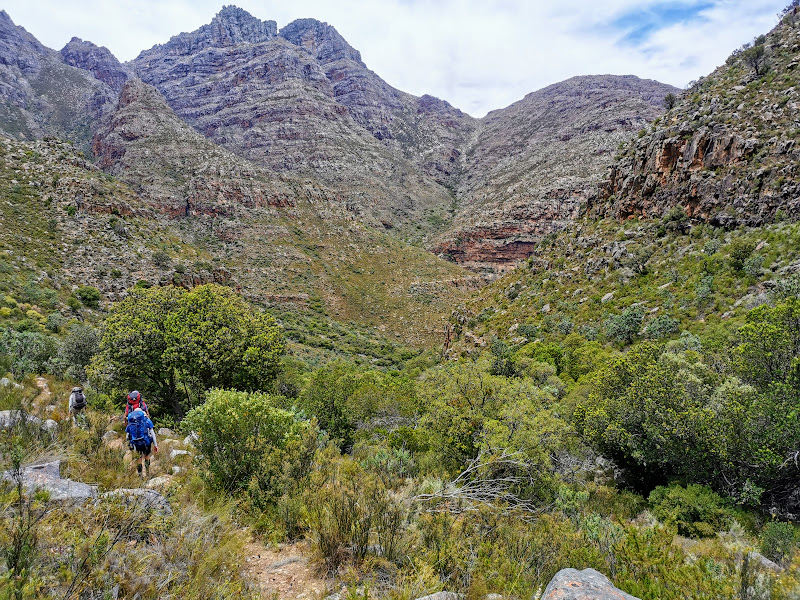 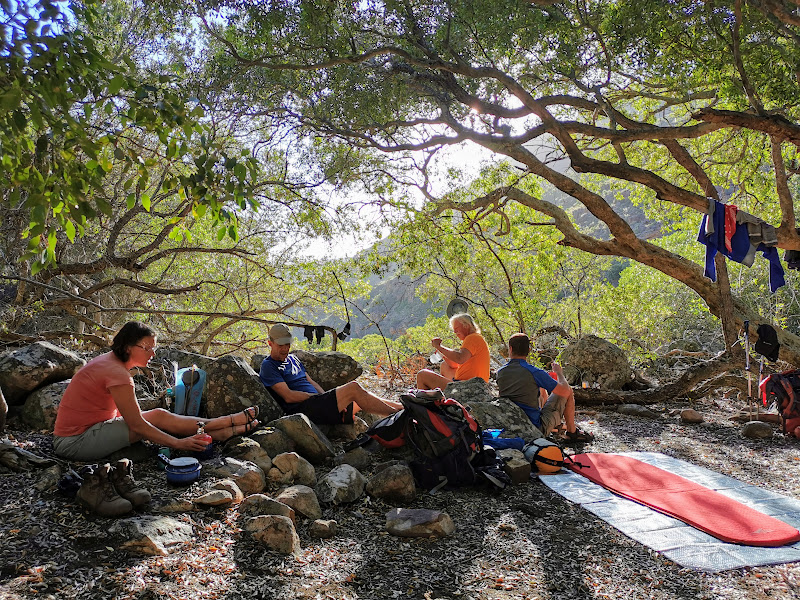 We knew that day 2 would be hot, so we were on the trail by 7 a.m. (The temperature eventually peaked at about 36 degrees Celsius.) After exiting Kruiskloof the wide and obstacle-free path undulates upwards above the Heksrivier (“witch river”) and makes for relatively easy walking. Although it only rises about 350 m over the 15.5 km to our next camp, we still climbed through 800+ m. Fortunately, the streams from side-kloofs were flowing so water was never a problem. These kloofs also provided the few spots of shade. We passed above a place called Dons se werf (or “Dons’ farmyard”). One Dons and his family farmed here during the 1800s, but were dispossessed of their land in the 1890s (source: Slingsby Maps Cederberg names, which is a wonderful resource, by the way). The valley is now part of the Cederberg Wilderness Area. Santie and Alex had made much of the camp at Riempie se Gat (“Riempie’s hole”), but although the river has some nice pools, a recent fire has thinned out the vegetation and the shade. The best campsite was under some rock overhangs – which unfortunately had been littered by recent hikers. Riempie was apparently a buchu gatherer, whose wife died here, so he stayed around to guard her body from the wildlife until help arrived, according to Slingsby. Buchu is a shrub that has been a traditional remedy for various ailments over centuries – buchu tea and buchu brandy are common forms of the medicine. Further up the Agter-Kruis valley another buchu gatherer, Swiet, succumbed to appendicitis in the early 1900s and the spot where his companions buried him is shown as Swiet se Graf (“Swiet’s grave“) on Slingsby’s map. Back in those days one had to appreciate the sacrifices made to gather indigenous medicines. 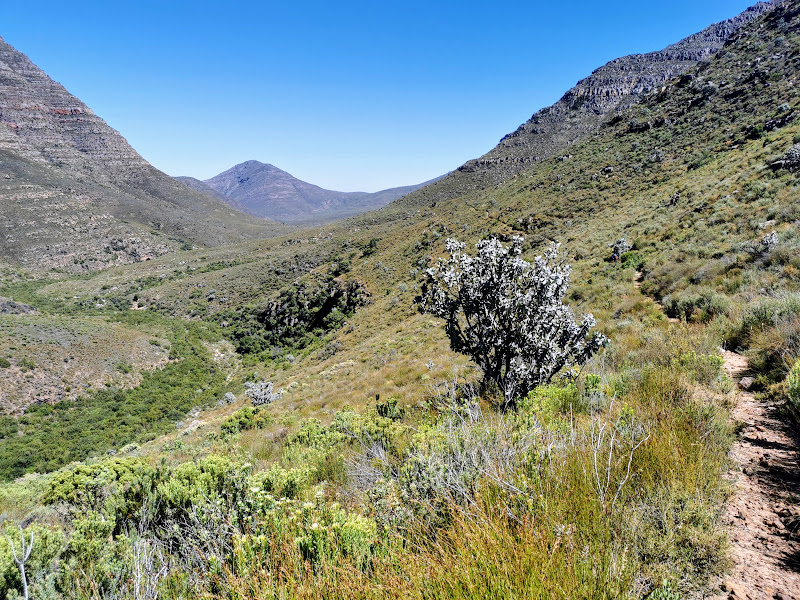 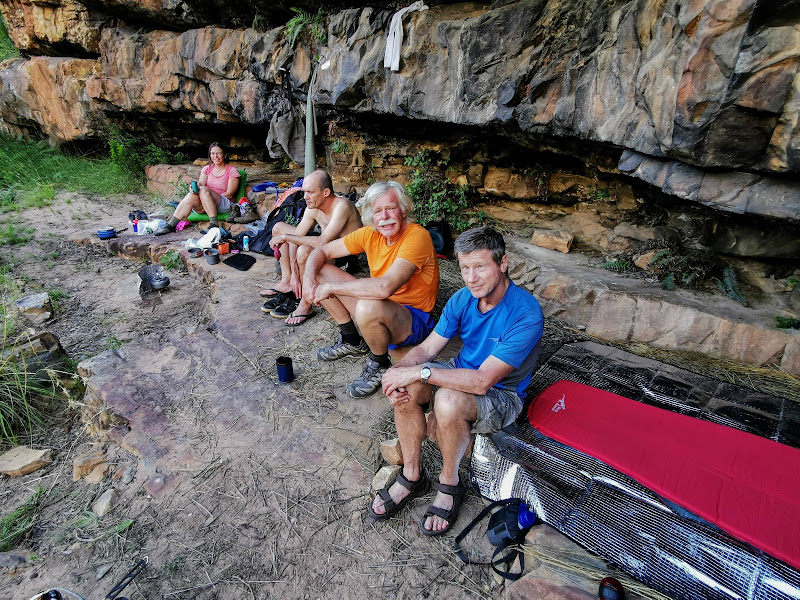 I had slight feelings of trepidation about day 3: it promised an 800 m climb to Bakleikraal in the heat, and then there was the question whether I felt up to walking a further 13 or so km to Eikeboom in time to drive out the same day. Our ways would part at Bakleikraal and my companions intended swinging south to the Breekkrans valley and the Old Cape Road (read the fascinating entry for Ou Kaapseweg on Slingsby’s site) before veering east towards Apex Peak and places with evocative names like Chaos and Hondverbrand (“dog burnt”).  I had previously walked this route down to Slangboshoek on the inaugural Rim of Africa. At the time of writing, my companions had completed their hike safely, but I had no details except some oblique references to “one for the history books”. 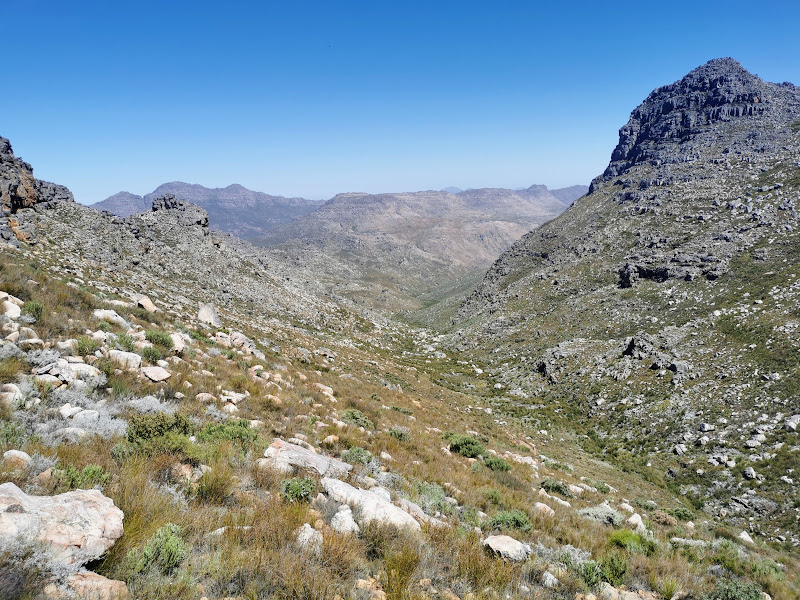 Looking back down to Riempie se Gat from below Bakleikraal

In the event, the climb was relatively pleasant and spectacular and the higher we climbed below Sneeuberg, the cooler the breeze became. We arrived at Bakleikraal (“corral of the fight”) at around 11h30. It is the site of a stone fort of sorts, either built during the South African War (1899 – 1902) or during earlier “wars” between boers and the indigenous population. After an hour’s rest and lunch, I departed up Kok se Poort and down onto the plateau below Sneeuberg. The Maltese Cross loomed reassuringly to my right and by 15h30 I arrived at a deserted Sneeuberg hut, which now sports a new eco-toilet. The place had apparently become a bit of a mess – bush ablutions are not everybody’s strongpoint. By 17h30 I had reached the bakkie at Eikeboom, after a 22 km x 1400 m elevation yomp, and washed in the river. As there was still another two hours’ daylight left and I had developed a craving for a ‘burger, I decided to drive home. 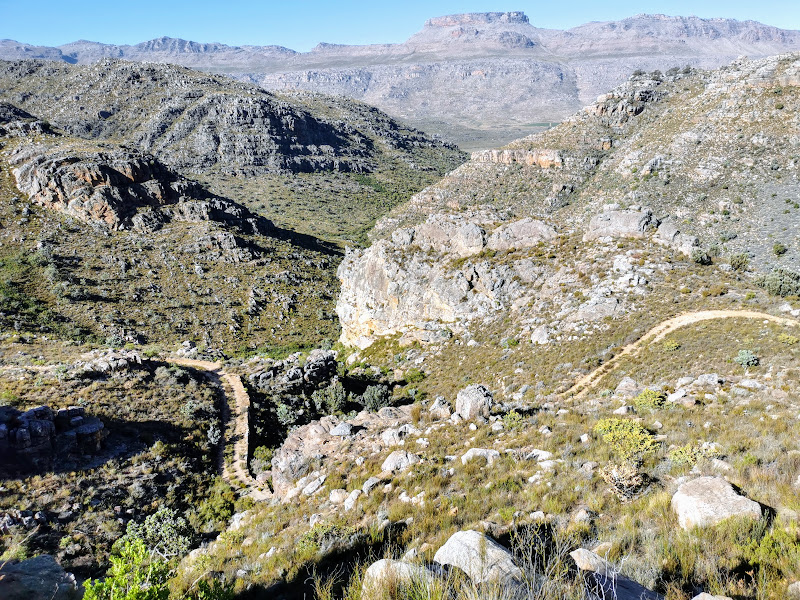 I drove relatively carefully because on the way up along the dirt road from Op-die-Berg to Matjiesrivier I had had a catastrophic blow-out of the left-rear tire some 30 km short of Nuwerust, where I was to meet the rest of the party pre-hike. The tire was destroyed and replacing it was hot work and difficult. Luckily the spare was well inflated and I had had a sort of premonition before departure and packed in a portable electric pump and tire gauge – both of which came in useful. Upon buying a new tire a couple of days later, I discovered that both the spare and the blown tire were manufactured in 2011 – so old rubber – while a second spare that I had used on previous overland safaris was dated 1973!! I found this astounding because I had bought that tire and rim in the early 2000s, which means that some tire place knowingly sold me an outrageously old and dangerous tire … At least I now know how to date a tire.

View the shared photo album of this hike