“A mountain journey of no ordinary experience” goes the Rim of Africa tagline. It suggests an other-worldly, spiritual journey, or maybe a quest that will test you deeply. 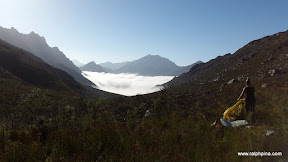 If I expected profound epiphanies as I wrestled with career frustration and anger, I was to be disappointed. Clearly I was not in the right frame of mind at the outset and consequently the first two to three days were more difficult than I usually experience on a long hike. I wasn’t good company, I was struggling with the weight of the pack, my fellow hikers’ quirks were irritating me sometimes which is unusual, and the heat nailed me on day 2 to the extent that the guides seemed concerned. And that irritated me even more because I am an experienced and strong hiker usually. They said my face was “grey”; I argued, somewhat obtusely, that it was the sunscreen that gave it that pallor. Upon reflection I embarked on the trail for the wrong reasons: I should have been doing it because I wanted to be in those mountains for a week instead of wishing to escape the anger surrounding my career circumstances. But after two days of struggle along the Langeberg from Montagu, which included a ridiculous fall that left me with a thick lip and grateful for having titanium incisors, a wonderful stroll down Protea Valley along the back section of the Swellendam Trail improved my mood no end. What was is that Kierkegaard wrote?: “I have walked myself into my best thoughts, and I know of no thought so burdensome that one can not walk away from it.”

The people that sign up for these hiking quests are generally an intrepid bunch. They are usually well educated and read, widely travelled, sometimes eccentric and many have done extraordinary things. So when you sit around the stoves at night, listen and be humbled, because somebody else in that circle has invariably gone further and higher or come face-to-face with her own mortal limits. Two members of the party, Andrew and John, had been on trail for 33 uninterrupted days when we joined them at Montagu. They had walked steadily south from the Pakhuis Pass through sections 1 to 5 (I walked the inaugural Rim in 2009 which spanned section 1 and most of section 2). It was interesting to observe their quiet humility, yet easy self-confidence. They knew what they were capable of and their packs had long since become natural appendages. I can imagine that after five weeks in mountain wilderness, you inhabit a totally different space.

If the 3D map does not render, download the kmz file and view in Google Earth.

Andrew and John,during their long hours on previous sections had concocted a hilarious story for the benefit of us newbies, which they laid on us at supper on day 2. With deadpan delivery John informed us that he was a member of a UK  prisoner rehabilitation and international exchange programme whereby long-term prisoners were allowed to participate in outdoor and conservation projects, like the Rim, to rehabilitate them and because UK jails were too full. Andrew was his minder and could track John’s whereabouts at all times through the tracking devices that they both wore. With slack-jawed disbelief we pressed John about the nature of his “offences”. He “reluctantly” explained that he was highly skilled with a scalpel and had become known as the “camp killer”, so skilled that he could cut the victim so painlessly that the person bled out without ever waking up. Mountain air must be so intoxicating that it heightens gullibility ….


If the slideshow does not render, go to the photo album.

I only had time for section 6, from Montagu to Grootvadersbosch, but many were signed up for a further 6 days to Garcia Pass near Riversdale – section 7. The Rim currently ends here. It was the first time that section 7 was being walked I think, and this was definitely the first time that section 6 had been successfully traversed, a previous attempt having foundered on day 2 high in the unforgiving folds south of Cogmanskloof. 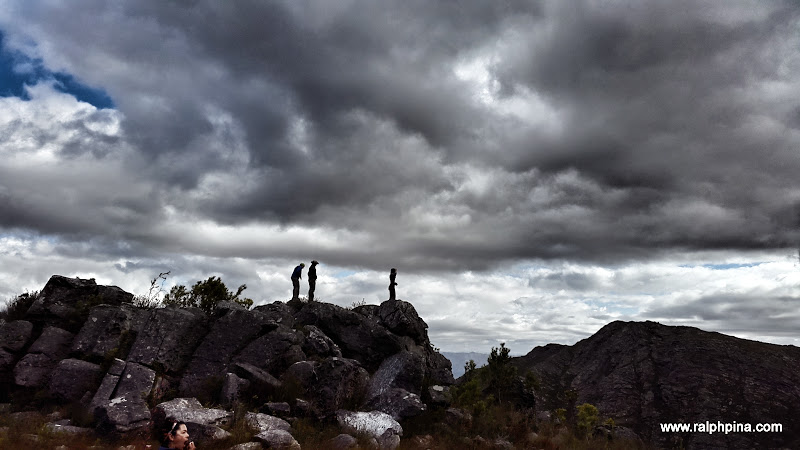 For me the highlights were the day we cruised down Protea Valley in all its spring glory, and the final day’s hike across the mountain from Tradouw Pass, over the watershed to Grootvadersbosch. 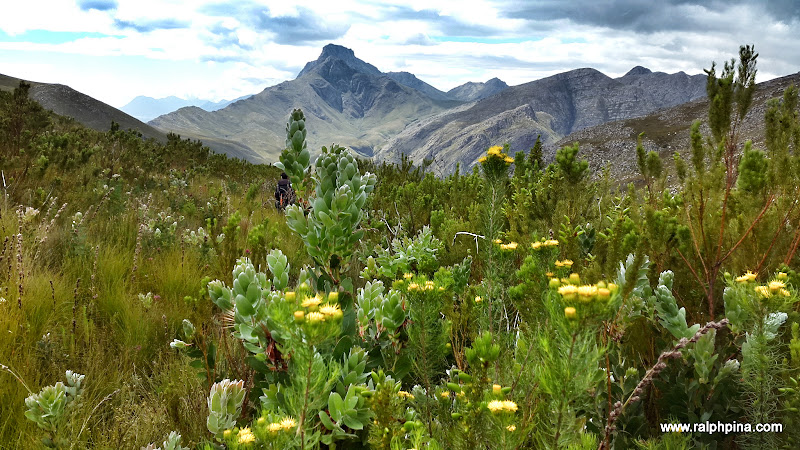 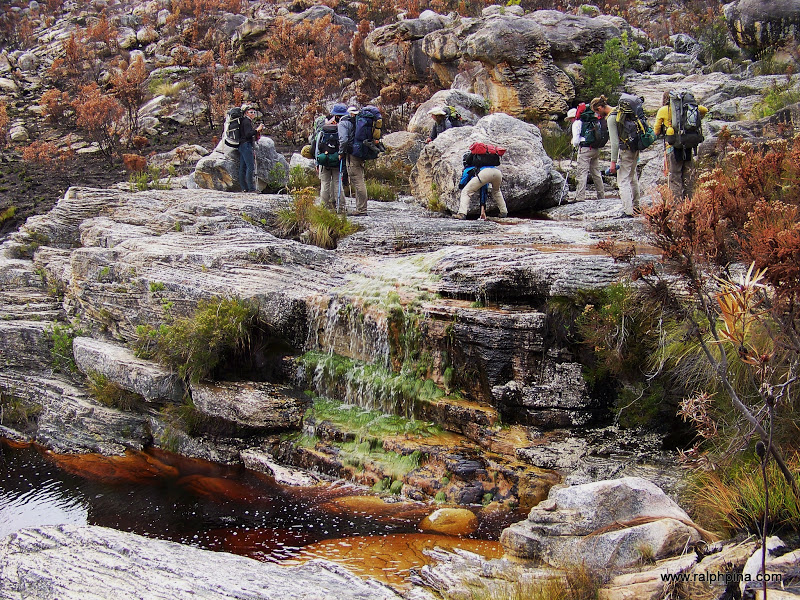