Colleague Johann Kistner organised this circuit of the Cederberg as a sort of team-building exercise. There was plenty of initial interest, but eventually the riders were pared down to 6, with Marion driving the backup vehicle – my trusty bakkie. Our route went from Clanwilliam, up Pakhuis Pass to Heuningvlei, Wupperthal, Matjiesrivier, Algeria and back to Clanwilliam, an accumulated elevation gain of 3259 m over 164 km.

Day 1 promised rain and when we approached 700 m ASL on the way up  Pakhuis we entered the rain cloud, so that the rest of ride was wet. Our route took the Noodpad (the donkey-cart track) from Pakhuis to Heuningvlei, a buitestasie of the  Moravian mission at Wupperthal. Please note that we had to obtain special permits from CapeNature to cycle the Noodpad. It is a rough pass that winds through distinctive red and black rock formations (I have hiked this way before). Our lodging was at the community-run Heuningvlei Backpacker Lodge, which was very clean, welcoming and neat, although concurrent operation of geyser and kettle was too much for the power supply. We had pre-ordered a traditional supper from the local women and it was a veritable feast of rural fare – highly recommended. Equally recommended is freshly baked bread the next morning.

Or download the .kmz file and view in Google Earth

Day 2 was a magnificent clear and windless winter day. The fast, bracing descent of Kouberg to Wupperthal was followed by being witnesses to a massive funeral at the mission church (it seemed as if Wupperthal had quintupled its people and vehicle populations) and wolfing down the bread next to the Madiba Tree. We then tackled the dreaded ascent of Kerskop Pass (or Tandjiesberg) where the maximum slope is over 20%. The ride across the Eselbank plateau, lunch in the veld and subsequent rapid downhills to Cederberg Oasis made for a wonderful sunny day. 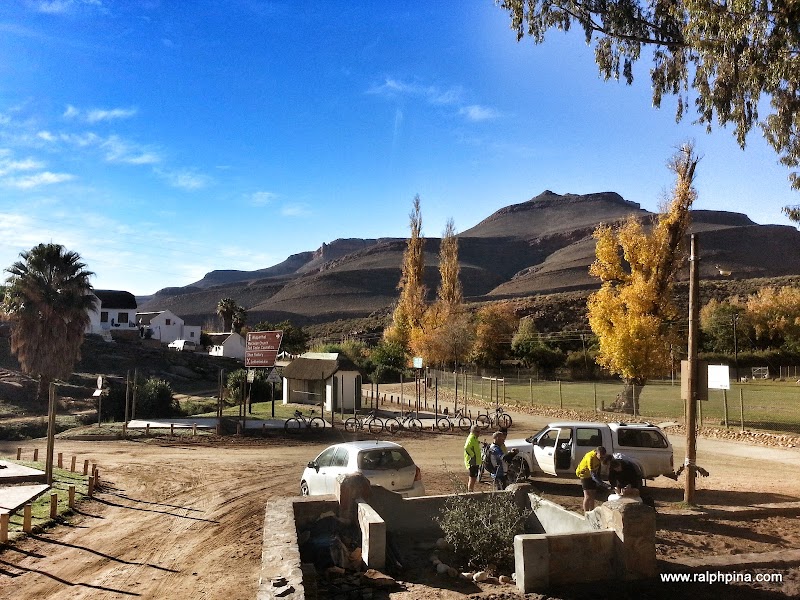 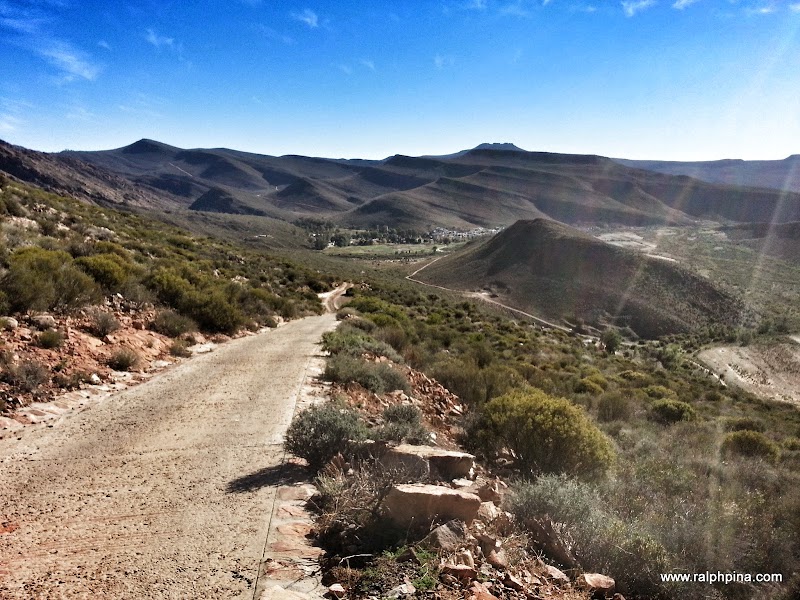 The front hit that night, but when day 3 dawned it had largely cleared. We spent the day pedalling into a blustery north-wester however. It was a long, hard 72 km ride on wet dirt roads, but the rainbows and clouds made for pretty pictures.