The first of our treks in southern Patagonia during April was the classic circuit at the northern end of Parque Nacional Los Glaciares (Glacier National Park), 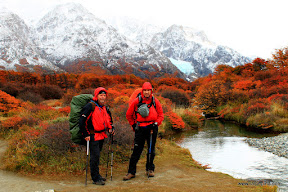 in  Argentina’s Santa Cruz province. The 5-day circuit of 53.5 km takes one to the glaciers, lakes and forbidding mountains of the Andes, through southern beech forests, and to the foot of one of South America’s best-known peaks, Fitzroy. As the websites warn, the weather is ‘unpredictable’ – and so it proved to be.

Some photos, a video clip, a Google Map with photo locations and some brief impressions follow.

Entry in the digital diary: “A little apprehensive… It’s wild out there.” I wrote this while lying in bed in our cabin on the Friday night of our arrival in El Chaltèn, listening to the wind roar down the valley. The next morning we set out in blustery conditions and rain squalls, with the brooding peaks lost in what looked like snow cloud. (Subsequently, some would admit that back in SA they would never consider heading into the mountains in such weather …).

Relatively nasty weather would dog our steps in Los Glaciares for the entire duration. At Camp Poincenot1 below Fitzroy the entry went: “Crikey! Is the wind blowing tonight (midnight)! Thank god for the cover of the forest. Gale-force squalls descend on the trees; the tent shudders; the constant roar and rumble.” My gear was up to it, but some in the group were having issues staying warm and dry.

The next day, the third day, six of the group of eleven decided to climb the 500m up to Lago del Los Tres (“the lake of three”) so named because of the three granite spires, including Mount Fitzroy, that tower above it. For a moment the weather had looked as if it might clear enough for us to glimpse the peaks, but by the time we breasted the lake’s dyke, sleet was being driven horizontally and it was getting icy. This was, in Kelson parlance, “full metal jacket” weather. So imagine our astonishment when a French day-walker traipsed up behind us, scantily dressed in jeans, a bunny jacket, ankle sneakers, no gloves, her outfit completed by a plastic shopping bag over the head. This is how people die in these places …

During the next days on the way to and in the vicinity of Glaciar Grande the weather improved and we spent two excellent days walking around Lago Torre to and from the glacier, an outing which included a little adventure on a zipline that is rigged across the Rio Fitzroy as it exits the lake. The scale and the grandeur of the place is awe inspiring. It was here too that, for the first time, I heard a glacier calve –a crack and long rumble. Here, Nature rules. 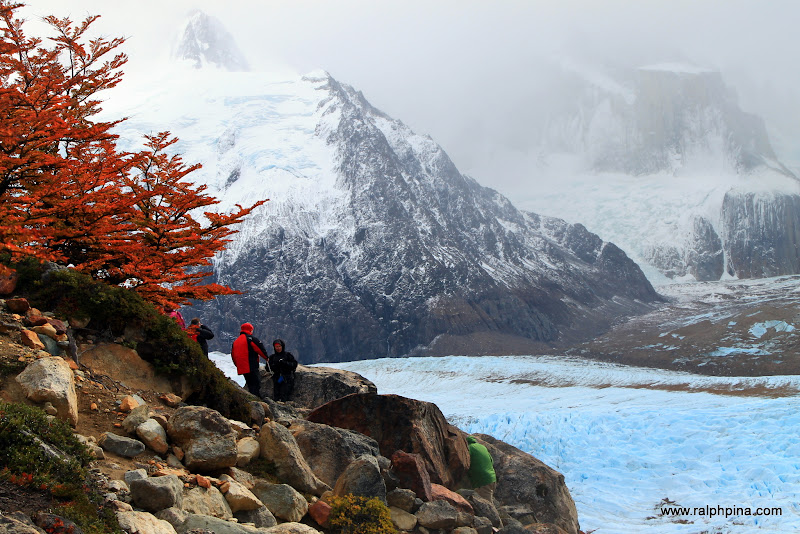 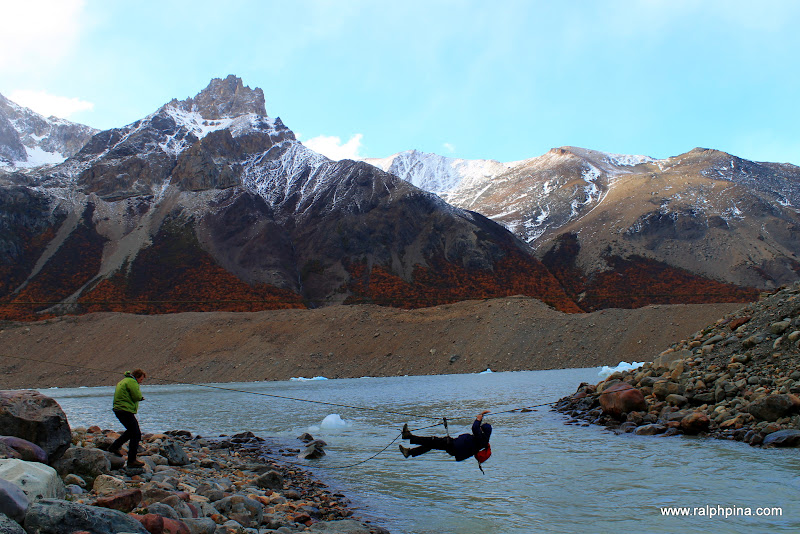 Ze zipline over the Rio Fitzroy

Patagonia’s ninja mice are achieving legendary status for their ability to penetrate tents and packs in search of things edible. In his recce last year, Kelson had learnt about them through hard experience 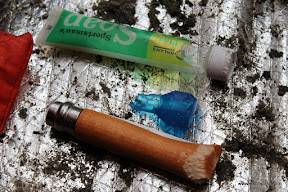 and we were prepared: every evening everything edible was packed into bags and hoisted into the trees. But our experience proved that even the inedible seems to be attractive to the little buggers. At Camp De Agostini, either because of its popularity or because the weather moderated, they were particularly active. I had to sacrifice an inflatable pillow, a drinking bladder bite valve and tube and a bottle of concentrated soap. The wooden handle of my knife was sculpted by little teeth and my valuable rain jacket had a hole nibbled in it. Others were worse off, having holes gnawed in their tents and having to host furry insurgents, resulting in some remarkably agile evasive action, especially in the ladies’ tent. Apparently it is possible to rapidly orbit the interior while in your sleeping bag.

I enjoy the Argentinian culture and the people. Just how much was brought home to me as I walked down the last hill into El Chaltèn and reached into my pocket to grab the GoPro to shoot some video. To my horror it wasn’t there!  I shouted to Paul to take my pack and prepared to jog back along the trail, hopefully for not too many kilometres. Just then two guys came walking down the trail and asked in Spanish if anybody had lost a GoPro… I could’ve kissed them (which is a standard form of greeting there even between males, by the way). Not having the GoPro for Torres del Paine and Tierra del Fuego, not to mention losing the footage in Los Glaciares, would have been disastrous.

Trek planned and guided by Kelson da Cruz of Treksa

1. Poincenot is named after the French alpinist Jacques Poincenot who drowned in the Rio Fitzroy in 1952.

Or view the Los Glaciares album