Photos and thoughts from the 2010 World Cup

Aka De Kaap is weer Hollands… I am a football fanatic – always have been.

That South Africa would one-day host the World 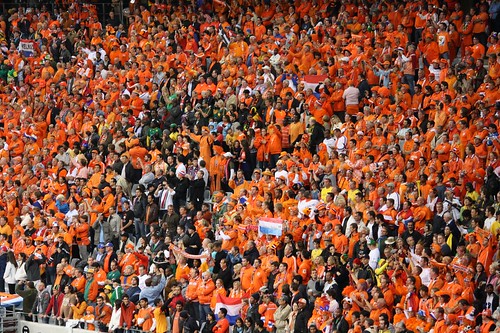 Cup seemed completely inconceivable when I was growing up in the apartheid era. When SA won the right to host it the sceptics – especially some expats justifying their decisions to flee, remnant local bitterbekke for whom the “new SA” can do no right, and the European media – doubted the country’s ability to host the biggest sporting event in the world. There would have to be a Plan B, an alternative host, if SA failed to meet the deadlines; the stadia wouldn’t be ready; security was a mess; etc., etc.  But we have done such a fantastic job that FIFA was moved to announce yesterday – tongue-in-cheek but also with an eye on all the Euro-sceptics – that SA would be “Plan B” for all future hosts of the World Cup.

I have attended 6 matches at Green Point and in PE so far and believe me, South Africa has been a different country for the past few weeks. People are friendly, smiling and helpful; the mood is euphoric despite Bafana’s exit; the people know we are doing a good job. Of course, some cynics might say that is because FIFA is temporarily the unelected government, in effect governing by decree. But something has changed (once again) in this incredible country. I can’t put my finger on it – it feels like that “something” that was afoot in 1994-5.

South Africa has enormous developmental challenges and is at risk from endemic poverty and growing inequality, a rapacious ruling elite, not to mention ecological degradation and attendant sustainability issues. Many will claim that we have subsidised FIFA profits with taxpayers’ money and that may be true, and if one views “development” as purely a financial transaction then such a view is justified. 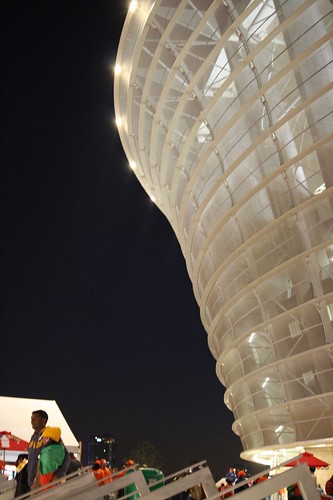 However, besides the infrastructural investments that have been made, such as in public transport where there has been an absolute sea change to which I can personally attest, and ICT, the intangible developmental value is enormous I think. South Africans’ “can do” mentality is more deeply and widely pervasive, much human capital has been created in the form of institutions, voluntarism, training, organisation, etc. Above all, the value of aligning everybody behind a common, desirable goal should not be under-estimated – and that is an important lesson when we face our looming challenges.

Finally, back to the football. The photos are mainly about our attendance of the matches featuring my beloved Oranje. The good-natured Oranje Legioen painted the city orange – De Kaap is weer Hollands (The Cape is Dutch again – a common Cape saying referring to 1803 when the British handed the Cape back to the Dutch – meaning that everything is back to normal again). For my family it was a special day as my dad immigrated from war-ravaged Holland in 1949 and consequently we have always maintained a strong identification with the Dutch national team – although my dad assimilated and acculturated completely and never raised us as anything else but South Africans. I like to think of my footballing heritage as being Dutch, while in all other matters I am an African.