“The Earth never forgets that trees were its first thought”

This intriguing idea was carved in Spanish on a wooden sign as we left Puelo on our first multi-day trek on the Los Hitos trail to Chile. And when you enter the ancient forests of northern Patagonia you realise what the importance of forests and wood are to, not only the landscape, but also the culture. Wood is a solution for almost every problem in these remote areas:  building material, primary energy source, wood chips as line markings on a soccer pitch (near Segundo Corral), stepping “stones” on a muddy trail, bridging a stream, etc. The forest is alternately a searingly beautiful ecosystem and an oppressive, menacing green blanket, depending on whether the sun is shining or it is raining. But it always seems to be eerily silent. The absence of wildlife and birdsong is strange.

Once we left Puelo and wound our way up the Chilean lake district, and then returned to Argentina via the Cochamò Valley, we almost never left the forest’s shadow. This is despite extensive burning by colonists and farmers in the 19th century and clear-cutting by lumber companies in the twentieth. Chile’s southern temperate rainforests are the second most extensive in the world, but seriously under threat outside protected areas. In the vicinity of the Rio El Arco, the middle section of the Cochamò Valley, ancient Alerce (Fitzroya cupressoides) trees, which can live for 4000 years, have survived because of the area’s remoteness. It is hard to comprehend the notion of a living organism breathing in the same location for thousands of years. When we reach sixty years we believe we have acquired some wisdom – what wisdom does 4000 years bring?

Another abiding memory of the trek is the feeling of travelling a hundred years back in time when we met the local farmers in the Cochamò Valley. Perhaps it was naïve of me, but I never suspected that people in South America in this modern age live lives of subsistence and isolation without any trappings of modernity, including electric light. Goods such as salt, rice, coffee and sugar are brought in on pack-horse trains. For the rest the farmers are self-sufficient, cultivating vegetable crops and farming with sheep, chickens and cattle – especially cattle. Income is generated by driving the cattle along the Cochamò “Road” to the sea every once in a while.

When I first saw the “road” – pioneered by the Jesuits and made famous by the outlaws Butch Cassidy and the Sundance Kid as their route out of Argentina to the Pacific coast – I could scarcely credit that gauchos could or would drive cattle on the narrow, muddy trail. And then I saw them do it – and understood why in places it’s a two metre deep donga with a floor of cloying, black mud and cow dung. At times, as the rain teemed down, we could barely progress at 1 km/h even with two walking poles each. We slid, fell, scrambled and cursed our way from El Arco to emerge from the forest north of Lago Vidal Gormaz on a remote farm, where the owner provided us with a shed to make a fire in and permission to camp on his land – despite the fact that he doesn’t like gringos (being South African held no water with him). Luckily, our co-leader Elena is not a gringo but a native Argentinean and a skilled negotiator.

That farmer was 86 years of age and didn’t look a day over 65. At the southern end of the lake we camped at Soto and Amelia’s farm, one of the most beautiful I have seen. Soto is 94 (Amelia 76) – we heard him working with a chainsaw in the forest the entire afternoon. He built their wooden house from Alerce (I think) shingles sixty years ago. They have eleven children who live in the coastal towns. Clearly, the simple but hard life promotes longevity. At those advanced ages, a rough two-day ride out of the valley could be fatal, so I guess those farmers are fated to die on their land, but I suspect that they would not want to be anywhere else either. Soto and Amelia were extremely hospitable and when we walked from their farm our rucksacks were bulging with home-made loaves, boiled eggs and farm cheese.

Refugio Cochamò is a new … “eco-lodge”, I suppose one could call it. It is a day’s 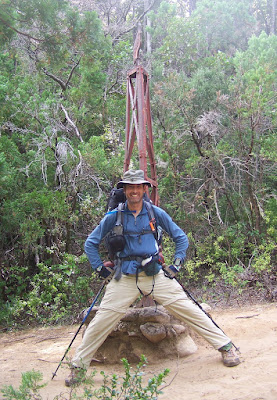 One foot in Chile, the other in Argentina

walk away from the start of the trail at the coastal end and is a haven and base camp for rock climbers for whom the imposing granite domes that dominate the valley are the South American “Yosemite”. We came across groups of them during our two-day stay: steely-eyed types who stare into the middle-distance; intense and focussed, poring over climbing diagrams and sketches detailing the most difficult routes, annotated with the arcane terms of their obsession. A fascinating sub-culture.

We were certainly very happy to enter its warm hospitality after

our first experience of “the road” in the rain. The refugio is owned and was built by an enterprising young couple, an American and an Argentinean, both climbers and it operates for six months of the year. It is powered by a 3.6 kW micro-hydro plant (50m head) whose excess energy is diverted to heating water, features LED lights and makes excellent use of natural lighting. The rest of its energy needs are satisfied by burning wood. Remarkably we were able to order pizzas for supper. A vegetable hothouse is in operation while other supplies have to be brought in by horse. Solid waste generated by the guests has to be carried out by them, and only organic waste is permitted to stay on site. To keep it as spotless as it is inside, guests have to remove shoes and wet and dirty gear and stow it on the porch. The system works a treat.

Water supply is not a problem in this valley; it is carpeted by rainforest after all!

The land in the valley is privately owned and like much land in Chile is under threat from hydropower and logging companies (and the southern fjords from salmon farming). The owners helped mobilise an NGO, Conservación Cochamó, whose mission is to protect the valley’s natural environment and culture through sustainable development and responsible tourism. Their campaign achieved some success when Chile’s then president signed a decree that guarantees protection of 80% of the river’s flow as an ecological reserve. However, the new president, who was elected while we were wandering around Chile, is a conservative and true to his kind could reverse it. I hope not.

It was interesting to hear that the argument that Conservación Cochamó mounted deliberately avoided any environmental agenda and purely focussed on the economic benefits of tourism for the local communities. Having been involved in ecotourism myself, I am very wary of making nature conservation and preservation dependent on something as fickle as tourism. But hey – if the tactic worked to obtain an important, yet short-term, concession then so be it. The NGO understands the socio-political currents in Chile better than I do – but I do worry about the long-term security of the valley’s protected status.

In the final analysis, this trip was one of those “trips of a lifetime”. It had nearly everything: new cultures, different lifestyles, breathtaking scenic beauty, ecology, history, hard hiking, adventure, great companions and tour leaders. I suspect that South America has not seen the last of me.

Mouseover the photo below to page through the photos