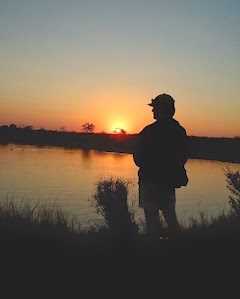 Metsi-Metsi trails camp – it apparently means “water water” in Sotho – is located 6 km from the Mozambique border in rhyolite bushveld on the eastern aspect of N’wamuriwa mountain.

Day 1: Led by Rudi & Abel, the rangers, this day started with a leisurely 8km ramble across the ridges south-east of the camp. The weather was pleasantly warm with the touch of a cool breeze. We enjoyed breakfast on the N’waswitsontso River. Our path crossed a loping herd of giraffe, including three juveniles, at fairly close range. Our group, all women except for me and the rangers, is easy-going and good company. No testosterone in sight – “rustig”.

A quaint Metsi-Metsi initiation ritual involved spitting impala dung pellets across a line drawn in the sand by the ranger. If someone had suggested that I would put dung of any description in my mouth, I would have called them “bossies” – but I did… Of course with few males in camp there’s plenty to go around.
That afternoon the walk on western side of N’wamuriwa along the Nwaswitsontso River was memorable. We played hide-and-seek in the riverbed with herds of kudu ewes, giraffe and two bull elephants. Sundowners at Silolweni dam followed, where we were serenaded by pods of hippo, about 15 of whom were within 20m of us, and whose supper had been delayed by our presence.

Day 2: What a morning walk! We drove north to the northern reaches of the Metsi-Metsi near Lindinda Dam, and set off into a breezy north-easter. First we happened upon a breeding herd of elephant, then a lone white rhino cow who was aware of our presence but was caught between curiosity and fear,

and then – a first for me – a black rhino! We got to within 100m of it and took care to stay downwind. It was unaware of us, which is just as well as these animals don’t keep their distance once they’ve rumbled you. Thinking that we had been especially blessed, we then spotted that rarest of cats, a cheetah, about 150m off to our left in the shade of a tree. It got to its feet and strolled parallel to our path and melted into the bush. Seeing cheetah (there are only about 200 in the 19000ha of Kruger) is rare, but meeting one while on foot is truly unusual. This event took place within tens of metres of the Wolhuter memorial, where the legendary Harry Wolhuter survived a lion attack, killing it with his knife while it was dragging him off.

One tends to focus on the big mammals, but in between we had been introduced to bag-worm nests, the uses of the magic gwarri tree, lizard eggs, the spongy praying mantis nest, the climate control and fungus gardens of the termite mound, and much more. My fifth wilderness trail has only served to confirm that these trails are the only way to truly experience the bush.