2 – 15 July 2001
Gorges Lodge, Victoria Falls
In a word – gorgeous. The lodge clings to the rim of the Batoka Gorge about 20 k’s downriver from the falls, high above and between rapids 19 and 20. For spectacle it is difficult to surpass, and it is far away from the noise of ‘planes, microlights and choppers that seem to be part and parcel of the new falls experience. It is a CAMPFIRE project, owned and staffed by the local tribe, while the concessionaires built and operate the lodge. 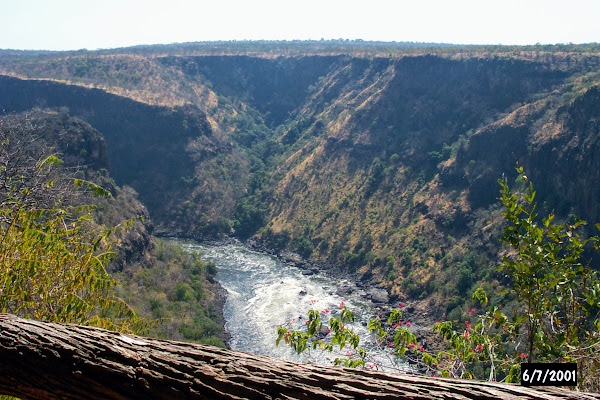 Here we spent two delightful days. Absolute highlights were meeting the people, guests and staff, and the long evening dinners around the heavy wood dining table on the dining deck, with the Zambezi roaring far below. Rob and Sue, the managers and recently dispossessed owners of Senkwe River Lodge on Kariba. It seems that any land agreement with the state is precarious at best. Morgan the barman who likes John Grisham’s books. He took time to explain the customs of the local, original inhabitants of this region. An American professor in comparative education and her daughter, Celine, from Hokkaido, Japan. A Japanese kid in a Caucasian body. She’s been everywhere, speaks almost any language it seems. Never have I had as interesting a discussion with a fifteen-year-old; well, I asked questions and listened mostly. She gave new meaning to the term “worldly”.

And then there was Aubrey. Madala, as he prefers to be known, was ending his stint as relief manager. Raconteur, sometime professional hunter, businessman, safari guide, San rock art expert and guide, radio personality, eats-everything-with-selfmade-peri-peri, Hwange elephant guru, conservationist, ladies’ man, Madala has packed a lot of living into his seventy-two years. Not many have had the privilege of guiding Sharon Stone around Hwange… We hit it off with him in a big way. He remains a fond memory of our time in Zimbabwe. 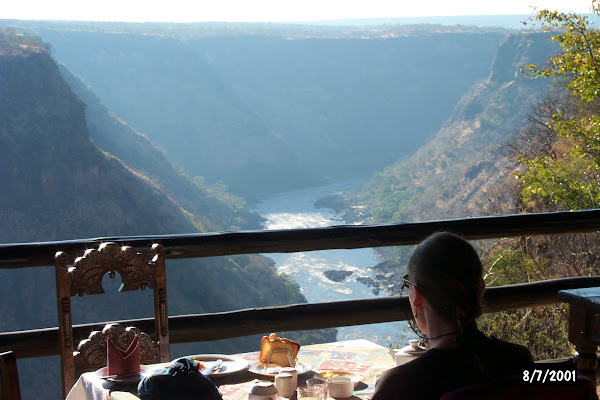 We did make the obligatory trip to the falls as Marion had never seen them before. Unfortunately, signs that Zimbabwe’s tourism and related industries are in crisis are everywhere. Vic Falls’ population ballooned during the recent boom years, but now beggars and informal money changers dog every step. People are desperate and businesses are hanging on. A few years ago the town was bursting with tourists; now its relatively quiet. More adventure companies chasing fewer customers. Let’s hope that the madness passes soon…

Despite this, the falls are still wondrous to behold, a rafting trip down the gorge an adrenaline rush to savour. I took a raft down the Batoka Gorge back in 1996 with the Safaris Par Excellence outfitters. It was a so-called “paddle boat” where the guide only steers and the guests paddle, as opposed to the one where the guide sits amidships and rows. The briefing was hilarious, all about “long swimmers” and “short swimmers”, and “the only thing that knows the way up is your lifejacket”. I also recall well the head guide’s reaction when the group, mostly young overlanders from Australia, volunteered for the paddle boats: “there’s going to be carnage on the river today!”. And there was. The rafts’ paddlers were nervously noisy, lots of Ozzy chirps, as as we shivered below the bridge below the falls waiting our turn. After the first mighty rapid it became very quiet. I saw “long swimmers” plucked from the water with eyes as big as saucers and others with that “1000m stare”. Our raft had a cool Zambian dude as a guide. We negotiated all the rapids without major mishap. I well remember sitting in front, my feet jammed into the webbing, and looking up at massive standing waves, or down into deep “holes”. On the last rapid, the “overland truck eater” or something similar, I was seated at the back next to the guide and he flashed his white teeth at me and said something like “these c…s are now going swim”. So I was prepared as he steered the raft straight at a gigantic standing wave. The raft shot up vertically, people and paddles tumbled from on high, one nearly breaking my leg, and then it flipped over backwards. But I was holding on to the safety lines with grim determination in the chaos. You haven’t been white water rafting until you’ve done the Batoka Gorge.

And so on to Kariba courtesy of Air Zambezi. This was a fascinating flight along the full length of Lake Kariba. I had never realised what a massive body of water it is. The pilot gave a dry, humorous safety briefing, laced with oblique references to Czech-speaking people. The penny dropped when I finally realised that the ‘plane is a Czech-built turboprop. It was remarkable for the ridiculous toilet in the rear, a retractable device resembling an industrial vacuum-cleaner. Impossible to use, it seems as if it has never seen action – and never will. 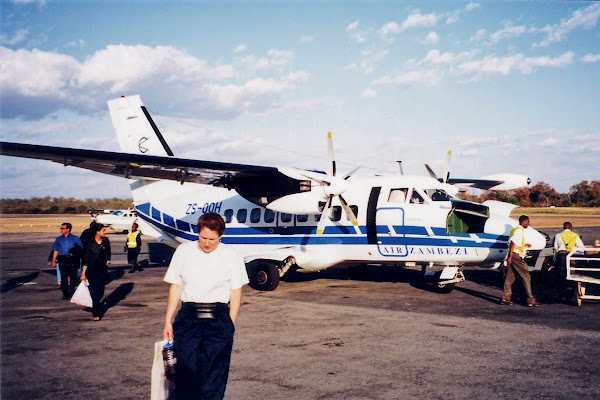 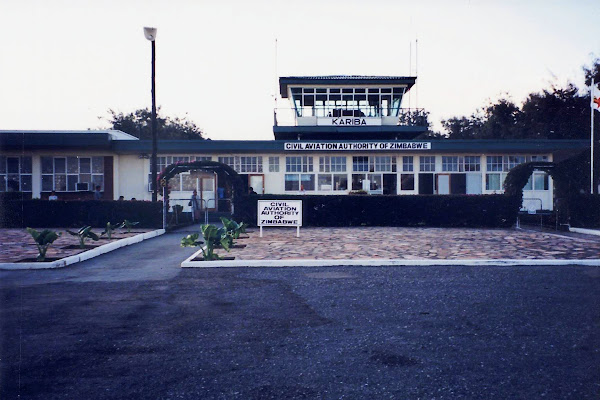 Kariba has an unusual feel about it. Sometime in the ’60s and ’70s it may have been the rage to position it as a Mediterranean-like or sub-tropical resort town. And then you notice the bushveld slopes. Many of the hotels date from those “halcyon Rhodesian” days. We stayed at the Lake View Inn – its name suggests its unique selling point. The Kariwa restaurant’s grilled bream was truly excellent; the view across the moonlit lake as good. It also served the best tea we had on safari. The waiters were friendly and efficient. At current prices there can be no better country to visit restaurants in than Zimbabwe. 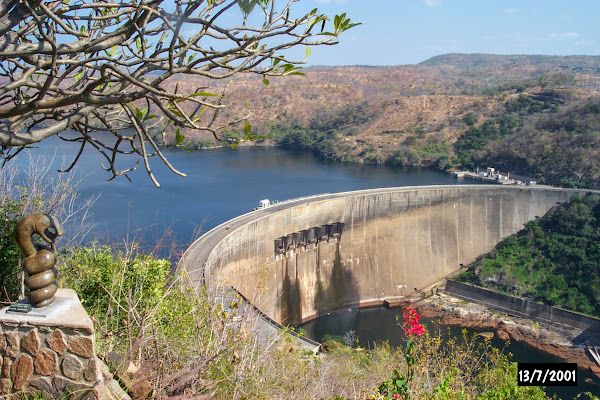 The next day, Canoe Safaris picked us for what would prove to be the absolute highlight of our safari, the Tamarind Canoe Safari.